The People of WaterFire: Michael Grando

Silence is a source of Great Strength.
― Lao Tzu

So many of us have marveled at Michael’s performances on the flaming river over the years. In his portrayal of Pierrot (Pedrolino) from the Commedia del’arte, he is on a naive and everlasting quest to win the heart of a beautiful girl. It was never just a plain gesture handing out carnations with charming quotations; to Michael, every instance of these moments was joy and pride of service in art.

For those who don’t know them, Michael and his wife Pat are so pleasant and inspiring to speak with; the way they glanced and smiled each other during the shoot took me back to Leonard Cohen’s song “A Thousand Kisses Deep”.

Michael reflected on keeping the five virtues of life as joy, love, acceptance, blessing, and gratitude in mind and yet remaining creative, compassionate, and optimistic. When I asked him who had influenced him in life, Michael said he has been blessed by the guidance of so many highly evolved and loving Souls. He said his parents were the ones who grounded him in the importance of love and kindness and supported any creative effort he wished to learn and explore. It was his mother who recognized his talent to imitate anyone and communicate without words; in which later became the major professional focuses of his life. His brother, Richard, a gifted genius musician and painter, was his first mentor who guided him to an understanding of allied arts and their relevance to each other. Lawrence Benson and Ahmed Ben Driss El Yacoubi were among his mentors and teachers. He also mentioned Dr. Ross L. Hainline who introduced him to the work of Carl Gustav Jung and an insight into the Collective Unconscious and the realm of dreams. It was a sentimental moment when Marcel Marceau’s name was raised. A teary eyed Michael placed his hand on his heart and spoke these words:

Marcel was someone who led the way for me in re-establishing mime as the archetypal form of theater in a popular venue and encouraged me to be beautiful and fearless on the stage. Thanks to Papa Marceau for his generous friendship and masterful teaching and for our many joyous and treasured moments of intense conversation. He was brilliant and wonderful.”

Interview and photo by Erin X. Smithers – Photographer and Jazz enthusiast
A special thank you to The Providence Athenaem for letting us use their magnificent space!

2 thoughts on “The People of WaterFire: Michael Grando” Hi all, I’m Kat and I am the Volunteer Coordinator here at WaterFire! I started here in May 2018 as the Volunteer Management and Engagement intern as my last requirement before receiving my bachelor’s degree in Program and Event Management from the University of New Hampshire. In May 2019 I started my full-time position in the Volunteer Department creating relationships and coordinating volunteers, leading many, many ‘Woodpile Workouts’, preparing materials and communications for our downtown lightings and so much more.

I am the Events and Operations Associate at WaterFire. I started as a Special Events Intern three years ago and then worked my way up to a full-time position in the Operations Department. For me, no two days are ever the same but I mainly work on all the details of the logistics to help put an event together alongside my team. 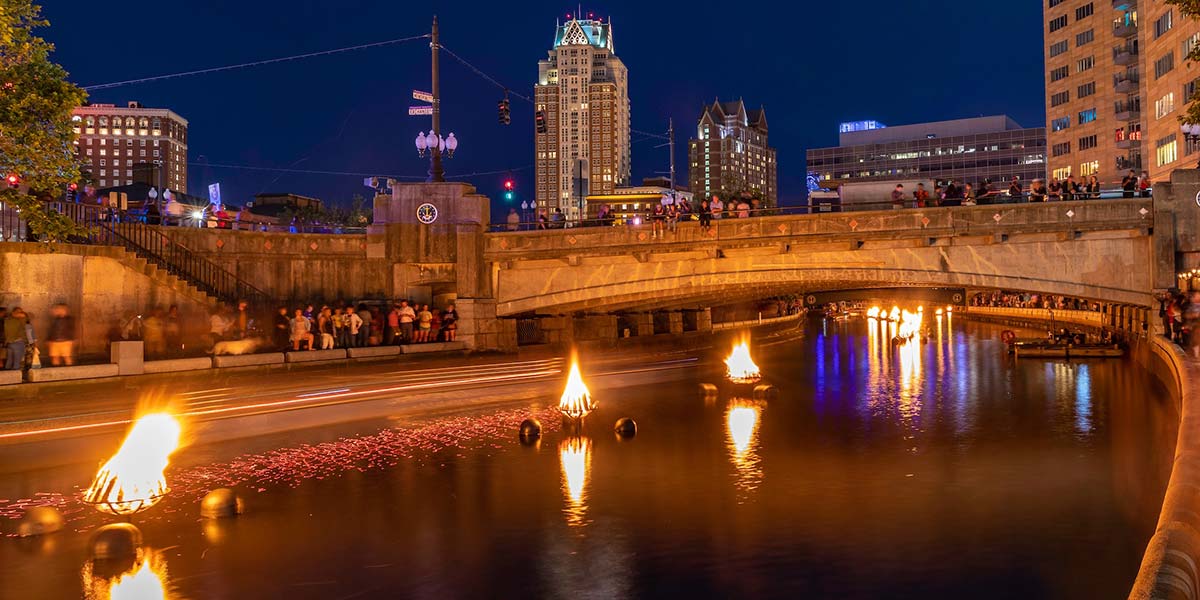 Hi there, my name is Ed Cabral and I’m the manager of sponsorships and corporate relations at WaterFire Providence. I’ve been with WaterFire for just under two years.

One of the things that people don’t know about WaterFire is that we’re a small organization with a small team that works behind the scenes. And the reason why people don’t understand that or know that is because we put such an amazing elaborate large production on downtown Providence with our WaterFire lightings.