“The Seeing” is a month-long video exhibition produced through a creative partnership between FirstWorks and WaterFire Providence of six film works scored by Daniel Bernard Roumain (DBR). On view in the WaterFire Arts Center gallery from Wednesday, January 12 through Sunday, February 6, 2022. A public opening is scheduled for Thursday, January 20, from 7-9 pm. <<Join the live-streamed Town Hall conversation on Facebook Live with Daniel Bernard Roumain on January 20 at 7:30 pm>>

The Seeing is a collection of films that are all related to our willingness to hear, understand, and love one another. Can we see each other? Of course, for so many, division and hatred is what is heard and understood, and hatred fills our screens and airwaves as it surrounds and drowns our communities into a chasm of despair. We are a country bound and divided by race, and these films take a clear-eyed view of race in America and how it unfolds for so many BIPOC people worldwide. The titles of these films reveal the intention of my work with an array of talented and brilliant film makers, from Yoram Savion to Dana Greenfield to Carlos Toro and others, all in deep collaboration. As a Black man in America, I am well aware of the trope of the being caught, in a frame, in a lethal pas de deux with law enforcement, hoping and praying to live.

There have been times when I have been afraid and feared for my life. These films speak to fear, but just as boldly, they speak to all of us seeking truth, justice, and a better American way—aren’t we better than this?

Presented by Sozo Creative, in partnership with arts institutions from across the US, the short film “They Still Want To Kill Us” marked the 100th anniversary of the 1921 Tulsa Race Massacre. It speaks truth to what transpired in 1921 at the Tulsa Race Massacre, an atrocity all but deleted from history until recently. The work’s premiere marked one year since the murder of George Floyd: a commentary on our progress this last century on the issue of race and America’s treatment of Black life.

“I HAVE NOTHING TO DO EXCEPT LOVE”
Composed by Daniel Bernard Roumain (DBR)
Libretto, vocals, and piano by Minna Choi
Directed, edited, and libretto by Dana Greenfield; with words from Simone Roumain
Cinematography by Sam Wolff
Dance and choreography by Sarah Bolander
Project management by Sozo Artists
Run time: 05:46

ABOUT FACE is the first of a 3-part short film series that puts a different spin on the school to prison pipeline and the role of fathers of black and brown children in the disruption of that paradigm. Based on original spoken word poetry by Marc Bamuthi Joseph and directed by YAK Films, ABOUT FACE features choreographer, dancer and actor Drew Dollaz and musical score by Daniel Bernard Roumain.

FEAR features American writer, spoken word artist, and activist Marc Bamuthi Joseph alongside a Kingston, Jamaica-based cast and is the second film in the trilogy The Just and the Blind. The Jamaican cast and crew “make powerful statements about patriarchy, the deadly menace of readily available weapons, and police violence — which all too often escalate already toxic situations,” explains Savion. “While all three of these films can stand on their own, the holistic architecture is to trace backward through the African diaspora — from Oakland, to Kingston, and finally Dakar (Senegal).”

Responding to the realities of creating as people of color during these unprecedented times, multimedia artist Carlos Andres Toro and composer/violinist Daniel Bernard Roumain collaborate on a live-streamed cinematic journey in film and in sound. As two proud sons of immigrant families of the diaspora between island nations and North America, Toro and Roumain marry their complex, fluid creative practices into a singular, seamless collaboration. Combining bold, dramatic imagery with a string and beat-based score, “Requiem for the Living, In Color” addresses the realities of living in modern-day America, where the inherent worth of black and brown bodies and souls requires impassioned pleas for their basic humanity to be recognized. This collaborative performance reveals life, loss, and an enduring legacy of hope.

Our Country, originally commissioned and filmed by FirstWorks, premiered at FirstWorks Urban Carnevale on December 30, 2020. This collaborative work combines DBR’s reinterpretation of My Country ‘Tis of Thee as the score to Dollaz’ choreography and performance in this work that addresses police brutality.

Daniel Bernard Roumain (DBR) is a prolific and endlessly collaborative composer, performer, and activist. “About as omnivorous as a contemporary artist gets” (New York Times), DBR has worked with artists from Philip Glass to Bill T. Jones to Lady Gaga; appeared on NPR, American Idol, and ESPN; and has collaborated with the Sydney Opera House and served for two years as FirstWorks Artistic Ambassador. Acclaimed as a violinist and activist, DBR’s career spans more than two decades, earning commissions by venerable artists and institutions worldwide. Known for his signature violin sounds infused with myriad electronic, urban, and African-American music influences, he has composed chamber, orchestral, and operatic works and created large scale, site-specific musical events for public spaces. danielroumain.com

FirstWorks is a non-profit based in Providence, Rhode Island whose purpose is to build the cultural, educational and economic vitality of its community by engaging diverse audiences with world-class performing arts and education programs. Since 2004, FirstWorks festivals, performances and programs have attracted more than 600,000 participants. Last season, FirstWorks arts education programs reached over 5,500 students from public and charter schools across Rhode Island with transformative, arts-based learning experiences. FirstWorks is the founding partner of PVDFest, collaborating with the City of Providence to produce the City’s free signature arts celebration since 2015. In 2019 PVDFest drew 130,000 visitors to Providence to experience music, art and spectacular performances. Embracing collaboration, FirstWorks has fostered over 90 community partnerships across business, social service, government, arts, and education sectors. Visit http://first-works.org to learn more.

NEW DATE FOR RELATED EVENT: “The Telling” is an extraordinary multimedia performance by renowned composer, violinist and activist Daniel Bernard Roumain (DBR). Originally scheduled for Saturday, January 22, this live performance is rescheduled to Thursday, September 29, 2022 to open FirstWorks’ fall season. The producers have prioritized the health of audience members and artists during the current high community transmission of COVID-19, while affirming the healing power of the arts. Visit firstworks.org for details.

Tags:composerdaniel bernard roumainexhibitionfilmfirstworkswaterfire arts center
previousBuy Art [small works holiday show] in the gallery at the WaterFire Arts Center
nextLots of little things add up, recent prints and their processes from Overpass Projects in the gallery 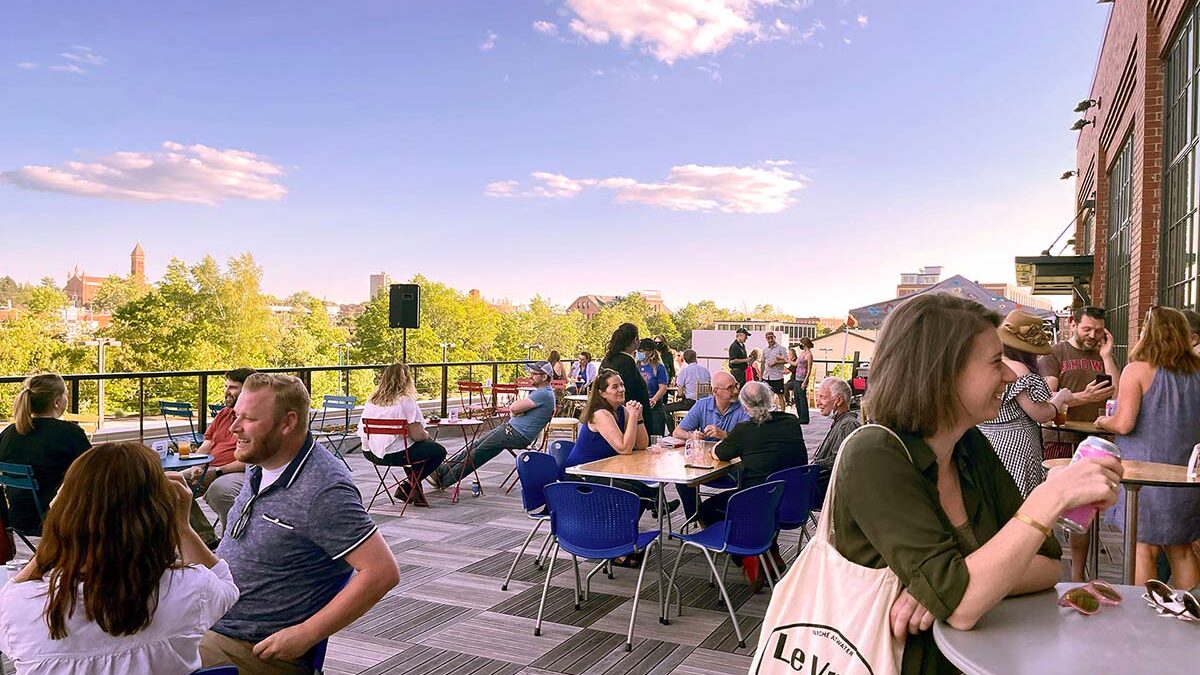