For the third year in a row WaterFire Providence is partnering up with RI Defeats Hep C for the “C is for Cure” event. The evening will be full of activity as they work to encourage discussion about a formerly taboo now completely curable disease; helping to eradicate hepatitis C in Rhode Island. From August 1st-8th, the Rhode Island State House dome will be illuminated in yellow to bring awareness to hepatitis C and its cure.

WaterFire Providence is now happy to announce that Rhode Island’s own Jeffrey Osborne will make a very special appearance at WaterFire’s opening ceremonies. At 8 p.m. Mr. Osborne will welcome the opening torch procession for RI Defeats Hep C led by Dr. Brian R. Edlin, Dr. Lynn Taylor, and other leaders in the fight against hep C, as well as introduce the Mixed Magic Exult Gospel Choir who will perform on the Basin Stage as part of the opening ceremonies. Mr. Osborne will be speaking again at the WaterFire Music Stage on Steeple Street shortly after 9 p.m.

The Jeffrey Osborne Celebrity Classic is coming to Rhode Island August 8th-9th. To ensure the future of music and art in Rhode Island, the Jeffrey Osborne Foundation created the Jeffrey Osborne Celebrity Classic (JOCC), an annual event dedicated to raising funds for non-profit organizations that support this mission, as well as those that provide a safe haven for families in need. The JOCC is the premier celebrity charity event in Rhode Island. In addition to the Golf Tournament, last year the JOCC added a celebrity Softball game held at McCoy Stadium. With a long list of celebrities such as Kareem Abdul-Jabbar, Magic Johnson, James Worthy, Chris Tucker, The O’jays, Smokey Robinson, Steve Grogan, Ty Law and Cedric “The Entertainer” to name a few, the game drew over eight thousand people and was a great success. The JOCC will be holding this celebrity softball game again on Monday, August 8th.

The Mixed Magic Exult Choir will be presenting the 10th Annual gospel festival: Greatness of Gospel 9: Trumpets & Thunder on September 3rd and 4th at 6:00 p.m. at the Mixed Magic Theater, 560 Mineral Spring Ave, Pawtucket, RI. Tickets and information at MMTRI.com (401) 305-7333. Pick up a copy of the WaterFire event program and map at any of our WaterFire greeter stations to get started with HepCHope’s Passport to a Cure scavenger hunt. Visitors can get their passports stamped, or just snap a photo with their smartphone, at the following event locations: the Guest Station in the Waterplace Park Basin Tunnel, Steeple Street near the WaterFire Music Stage, The WWII installation in Memorial Park, and the HepCHope.com tent on College Street. Each stop along the Passport to a Cure route will be marked with a set of three illuminated gold stars.

Participants can return their passports with three of four stamps or show their photos at HepCHope.Com’s information tent on College Street, which is the final stop, for a chance to win some exciting prizes. Courtesy of the Jeffrey Osborne Celebrity Classic, we will be raffling off two pairs of VIP tickets to the JOCC softball game on Monday, August 8th at 7:05 p.m. at McCoy Stadium. These tickets include an All-You-Can-Eat BBQ and opportunities for autographs and selfies. We will also be raffling off one playing position at the Jeffrey Osborne Celebrity Classic Golf Tournament on Tuesday, August 9th at the Carnegie Abbey Club.

Also available for raffle will be the opportunity for eight couples to take boat rides on the same evening (August 6th) through the fires on one of our special guest boats.

As an alternative to entering one of these raffles, Passport to a Cure scavenger hunt participants can choose to receive a giveaway item from HepCHope.com.

We encourage visitors to finish off their scavenger hunt experience by exploring the Resource Fair and receiving a free confidential hepatitis C screening on the College Street Bridge. 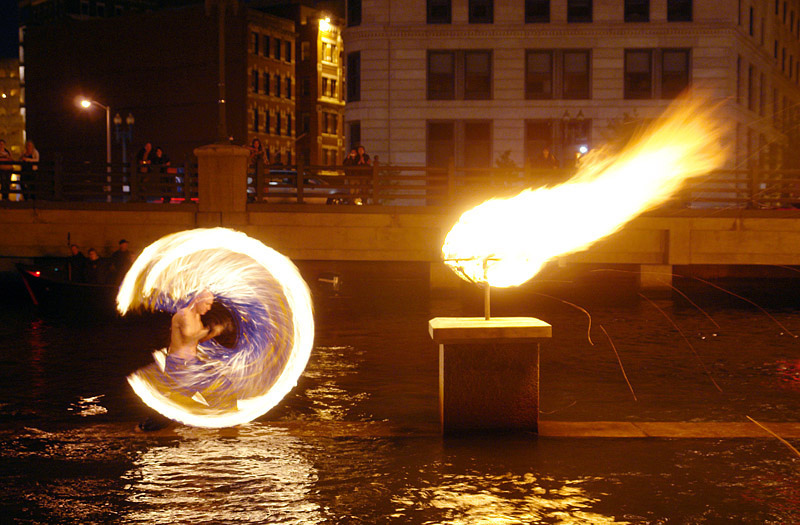 Fire spinners Spogga Hashway, Julia Jerome, and Benjamin Reynolds will dazzle you with their breathtaking performances throughout the night.